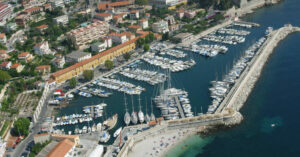 A few miles from Nice, the Villefranche sur Mer bay is an attractive site, known for its development of leisure boating and tourist cruises.

Bathed by the waters of the Mediterranean basin (dating back over 30 million years), the bay housed the English, French, Russian, and American war fleets.

Its military vocation dates back to the 18th century, when the city became an arsenal and a military port that housed the galley fleet of the Dukes of Savoy, who became kings of Sardinia in 1720.

In addition, its privileged geographical location attracted many scientists and researchers, starting oceanographic research in the 1880s, now of international renown, within former military dock buildings.

As a result, the site has exceptional heritage value. It is this maritime heritage that the Association for the Preservation of the Maritime Heritage of Villefranche (ASPMV), created in 1995, aims to study, preserve and make known to a wide audience.